Get fresh music recommendations delivered to your inbox every Friday.

Is Fortune a Wheel

by Monica Pasqual & the Handsome Brunettes 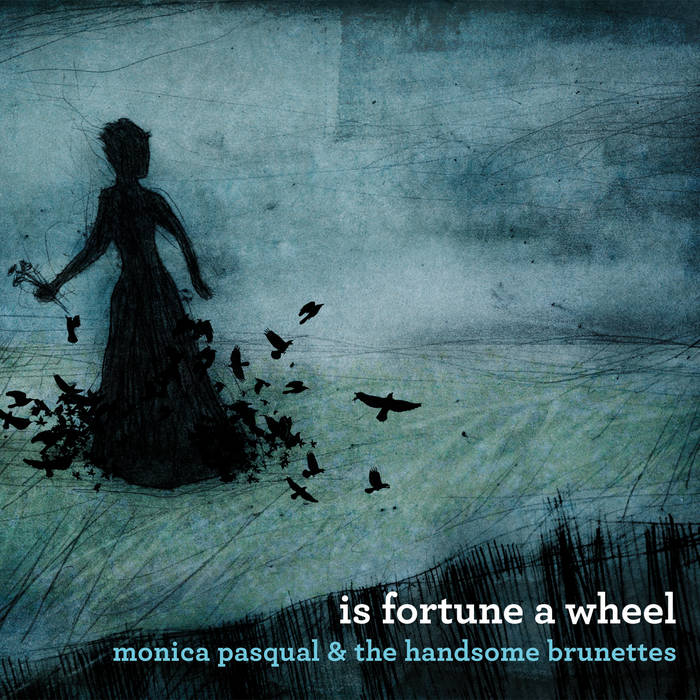 "... There is a rare elegance and subtle drama to her lyrics. The melodies sway and soar, haunting in one moment, majestic in the next...Every track is a gem. Pasqual is a very special artist, exploring love, loss and life in profoundly moving ways. To know her music is to love it. Far more people should know it."
- Paul Freeman, Pop Culture Classiccs

"Stunning in its power, cathartic in its depth -
Is Fortune a Wheel is a musical triumph born from the ashes of grief".
Patrick O'Heffernon, Shutter 16

Everyone understands the need to grieve when someone you love dies, but what about when they slowly disappear right before your eyes, becoming a different person housed in the same body? Monica Pasqual’s new concept album, Is Fortune a Wheel, explores her experience with a more subtle, incessant kind of loss as she cared for her partner of seventeen years who was diagnosed with degenerative brain disease.

The songs propel the listener on a journey through time and place, a journey which almost mirrors the stages of grief. There is the moment of discovery that something is about to change, followed by the battle of trying to stop the unstoppable. Even as the change is occurring there is the understandable attempt to hold onto the past and the inevitable realization that it’s not going to be possible. Ultimately, there is acceptance, and the recognition that the only way forward is to move through.

The album opens with the title track, recalling a walk in the Spanish hillside above Granada when it first became apparent that something was wrong. In the midst of a perfectly beautiful day surrounded by idyllic scenery, an encounter with a gypsy generated a foreboding premonition that settled in. As things changed rapidly, tiny and seemingly insignificant moments would trigger vivid memories of earlier times when the love was new, leaving Monica feeling a profound sense of loneliness as she confronted the discord of the current reality. Swann’s Way is a recounting of this carousel and a nod to the French philosopher Marcel Proust. At times these memories of the start of the relationship were overwhelming. The passionate and unbridled beginning of love that was so exciting and unforgettable is explored in the song Wild. Golden Cuff confronts the alienation and loneliness that Pasqual felt on the road as she tried to hold everything together from afar.

Memories of her sister’s house in the Barcelona hills are at the center of Strings In My Human Heart. Monica and Tom spent time there on several occasions before and after his sickness was discovered and this song explores how experience is tied to place and the conflicting emotion that can go along with that, the desire to abandon the past completely. These special places can be so precious and at the same time so painful as it becomes clear that the good memories experienced there are gone, never to return.

Monica found that the person she had loved for 17 years was disappearing before her very eyes. As his brain declined she realized that she “was losing him slowly - losing his mind, his memories, and a certain essence that his incredible wit and intellect defined.” The essence of what made him who he was dissipated like steam billows out into nothingness. Steam chronicles this parallel between her love and the nature of steam. Steam begins with so much power that it can be used to propel a locomotive and eventually releases into the ether leaving nothing behind. In much the same way her love for her partner began with such immense power and so much of it, but it had come to a point where he was essentially gone because he was no longer able to see her or understand her experience, not because he didn’t want to, but because he just wasn’t capable of it anymore.

To complicate matters further Monica’s band Blame Sally reached a point in their career when things really started taking off. She had to juggle caring for her partner alongside a busy schedule of touring and recording with the band. It was an interesting dichotomy to live through as professionally things began to soar even as this situation in her personal life steadily declined. It was during this time that Monica won in five categories of the Independent Music Awards, three with Blame Sally, and two for her solo album, This Cold Desire.

When Monica came to the realization that she was not able to continue being the primary caretaker for her partner, she found she was simply not able to be the person that she thought she had to be. “No one can say I didn’t try” is one line from Saint in the Yard, which is about reaching a point where she knew she could no longer deny herself the right to her own happiness and self-actualization. “I could see that I was starting to go down with the ship. To separate from him was the hardest decision I have ever had to make, and though I believe I have done everything possible to help him stay comfortable and happy, that decision still hurts me.” The album ends with The Color Blue is Everywhere which was a phrase uttered by a psychic and became the mantra for her new future, transitioning into a phase of reclaiming her power, her nature, and her life.

Making an album wasn’t the first thing on her list of things to do after this overwhelming and often draining process, but when she met and began collaborating with a talented young cellist, the wild and unrestrained nature of their musical connection was just the catalyst she needed to form Monica Pasqual & The Handsome Brunettes. Josh McClain “wields his cello like a post-impressionist brush” and his playing acts as a counterpoint, weaving between Monica’s piano and vocals to create a big, emotionally complex sound. Together they create a soundscape that is rich in dynamics, moving easily from quiet fragility to unrestrained propulsion. Brilliant percussionist, Pam Delgado is the thread that connects through so much of Monica’s musical life. She is a fellow band mate from Blame Sally and a long time collaborator with Monica prior to the Blame Sally days. Her impeccable rhythm, color, and gorgeous vocal harmonies add depth and breadth to these songs.

Is Fortune a Wheel, was recorded at Opus Studios with the core musicians all in one room to capture the potent energy of the live trio. This was a new way of recording for Monica and made for an incredibly dynamic sound. She then took these core recordings into the studio and worked with her accomplished co-producer BZ Lewis to add more layers of guitar, bass, and looping and brought in the adept Velvy Appleton to play additional guitar.

Recorded and Mixed by BZ Lewis

Pasqual is the winner of 9 Independent Music Awards. Her songs have been used on numerous network television shows and she has composed soundtracks for PBS, The History Channel and National Geographic Television. For the last 19 years Monica has been a member of the popular Bay Area Band, Blame Sally, touring the US and Europe extensively & releasing 8 albums. She has recorded 6 solo albums. ... more

Bandcamp Daily  your guide to the world of Bandcamp